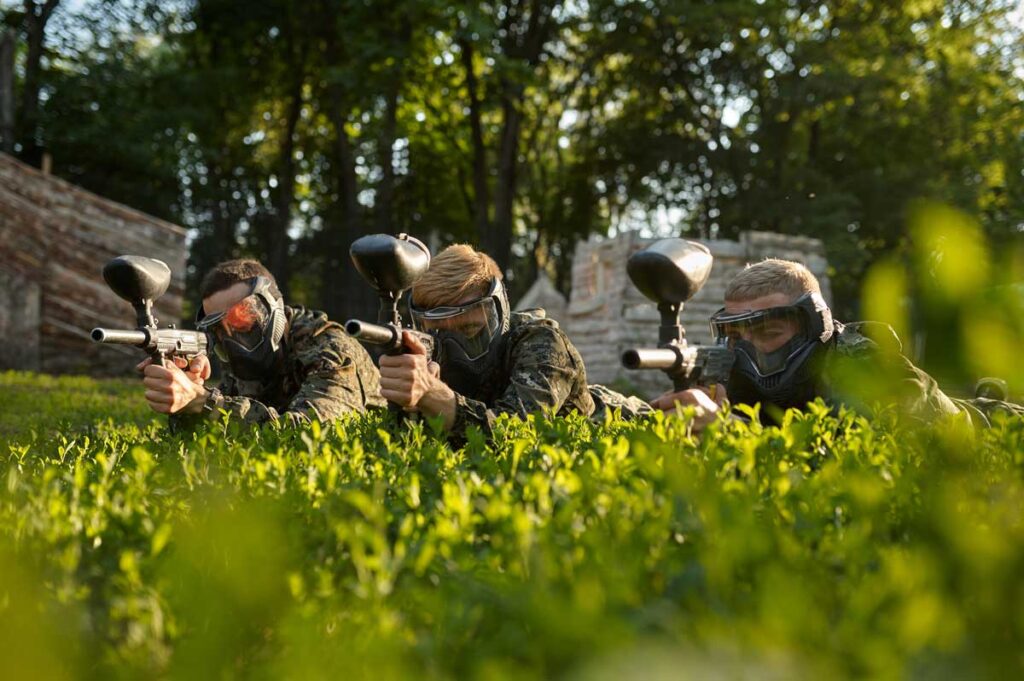 1. A minimum of one person is designated as the Referee for each Paintball game. The Referee will be the one who starts the game, stops the game for paint checks, decides the issues that may arise and who ends the game. The Referee should have a whistle for signaling the start, stopping and ending of the game. As with all games, it does not pay to contradict the decisions of the referee, decisions by referees and judges are final and unarguable.

Trending
Your Guide to Buying Paintball Hoppers and Loaders

2. A player is out of the game if he is hit by a marking pellet (paintball) and it breaks on him, this includes his clothing, gun or equipment. It doesnt matter whether the player is shot by a opposing player or a teammate (friendly fire). When a player is marked she he is to immediately call themselves OUT or DEADMAN . She he must then hold their gun over their head, continue to call out OUT or DEADMAN and leave the playing field by the shortest and safest route.

Trending
How To Get Better At Paintball

6. Predetermine the length of the game. Most games run 30 to 60 minutes, with 45 minutes being the average. The Referee will be the one who keeps track of the time. By setting time limits you make for a more aggressive game. If no one wins, who cares, go on to the next game and try some new strategy. Have Rest periods between games. Predetermine their length and have the referee keep track of the time. The Rest Periods allow the players to refresh themselves, to talk over the game that they have just played, to reload ammunition and Co2 gas, and to clean or repair equipment.

7. If the game is a flag game, only one player is permitted to guard the flag at the station. If the guardian gets eliminated from the game, s he leaves the flag at the point where s he got shot.

8. A player is not allowed to move together with the barricades.

9. Whether Dead Man Walking – DMW is allowed or not needs to be predetermined by the teams. DMW is when a player, although not hit, walks alongside players who got shot and are walking out of the game field. This deception gives him her the advantage to change his her shelter or to get nearer to the rivals.

10. Dead Man Silent is when a player gots hit and walks out of the field. During this walk s he is not allowed to speak to any of the players. A marked player is to walk out of the field and to report immediately to the referee for a paint check.

11. All paintballs used at the tournament must be purchased from the referee. No carry-on paintballs allowed. The game does not stop during this interaction. The referee leaves the paintballs to the player and walks away. The player runs the risk of getting hit while purchasing the paintballs.

13. Every team has a captain. At the meeting, captains will receive any final instructions and written notice of rules. After the game, captains of both teams attend the calculation of the points done by the referee.

14. Team captains have to waive to the referee, in order for the game to begin. The referee blows the whistle and the game commences officially.

16. A team will be disqualified if any player enters or attempts to enter a playing field for a game without having signed a waiver.

Marshals prepare, organise and run the Paintball day. They will take teams out to the playing areas and brief them on the objectives and rules of each game. They also act as referees during each game. As with any sport, the referees decision is final and they should not be argued with.

A pellet has to hit you, break open and mark you to count as a kill. The following dont count A pellet hits an object first and paint sprays onto you. A pellets hits you and bounces off (always check yourself before you say you are out.)The following do count A direct shot that hits you anywhere on your body, gun or goggles and leaves a splat of paint counts.Being shot by your own team is very common and counts.If you do get shot (virtually everyone will get shot at some stage) you simply hold your gun up in the air and walk out to dead zone (an area outside of the playing area where you wait until the end of the game and watch how the game progresses).Dont walk through the playing area, with your arms by your side, mumbling about being shot you will get shot again.

4. Keep Those Goggles on

The first and most important rule in Paintball is to keep your goggles on. If a Paintball hits your eyeball it wont leave much behind. After each game all players and marshals return to the Neutral Zone (a safe area where no guns are allowed) for a short break and to prepare for the next game. The Neutral Zone is the only place where goggles can be removed.

1. Paint guns must have a barrel blocking device (plug) inserted in barrel at all times, except while on the playing field. In case your gun has CO2 leakage, avoid coming into contact with the gas. CO2 has a freezing temperature -76 C.

Shooting someone in the back from point blank range will cause a lot of pain and make you very unpopular. The sporting thing to do is to ask them to surrender if they dont then shoot them.Surrendering only works when you sneak up behind a lone opponent u

Divide up into fair teams. If some people are new to the sport and others are more experienced, divide them up between the teams. In general, try to keep the number of people on each team about equal. If there are just a few people playing its not too hard to remember whos on your team, but if there are larger groups of people, tie some colored tape or cloth around your arms or guns to identify different teams.

Shooting someone in the back from point blank range will cause a lot of pain and make you very unpopular. The sporting thing to do is to ask them to surrender if they dont then shoot them.Surrendering only works when you sneak up behind a lone opponent unnoticed. If you are in a face to face fire fight they are not going to surrender and nor are you. Jumping into a wooden hut containing three opponents shouting surrender doesnt work. You will get shot at close range.

Before any game begins, be sure to talk a walk around the field and clearly indicate the boundaries to everyone who will play. Make sure that your field is not too big or too small. A field a hundred yards long and fifty yards wide is great for 3 on 3, but if you have sixteen people, you need more room. Establish starting bases on opposite sides of the field and, if possible, make it so they are not in view of each other. Note that if you are playing on a speedball course with no trees or brush, this wont be possible.

Eleven year olds and over can play paintball, however we generally advise 13 years and over because of the following A group of paintball players ready to start Most games are open sessions meaning several groups are mixed together. Groups tend to come from a variety of backgrounds such as stag groups, sports clubs, hen dos, birthday parties and groups of friends. If your group of 11 year olds is mixed with a group of 30 year old rugby players they may feel a bit intimidated. If you think your young ones will cope, then great they will be welcome to come along. If they are on the delicate side or may be offended by a bit of colourful language it may be better to wait a few years or come along on a Young Guns Day.

The gun is a heavy bit of kit (gun, gas bottle and hopper filled with paint pellets). Smaller children can find it difficult to carry, aim and shoot, let alone run. The pellets are fired at around 200 miles per hour. When you are hit by a pellet it can be painful, especially when shot at close range. Older children tend to be able to cope with being shot, younger slighter children can find it unpleasantly painful. The pellets may also leave a bruise that can last for a couple of weeks.Any player who is over 11 years and less than 16 years will need to bring along a letter of consent (download) from their parents to say that they have permission to play Paintball.. Alternatively if a parent drops their child off they can counter-sign the player sign-in sheet to acknowledge they have given permission.

11. Walking Off the Field

When a player is hit, they must then raise their gun over their head, shout that they are hit, and then quickly leave the field to the dead area. Be sure to keep your gun over your head and to shout that you are hit whenever you come across new players.

If you think you might have been hit but cant tell for sure (such as if your back was hit, but you cant tell if the ball broke), you can call a paint check. Shout Paint Check and the closest player to you (on your team or the other team) will come and check you. If you are hit, you will then exit the field, otherwise everyone returns to their previous position and the game is resumed when the player who initiated the paint check shouts Game On!

Menu
We use cookies on our website to give you the most relevant experience by remembering your preferences and repeat visits. By clicking “Accept All”, you consent to the use of ALL the cookies. However, you may visit "Cookie Settings" to provide a controlled consent.
Cookie SettingsAccept All
Manage consent

This website uses cookies to improve your experience while you navigate through the website. Out of these, the cookies that are categorized as necessary are stored on your browser as they are essential for the working of basic functionalities of the website. We also use third-party cookies that help us analyze and understand how you use this website. These cookies will be stored in your browser only with your consent. You also have the option to opt-out of these cookies. But opting out of some of these cookies may affect your browsing experience.
Necessary Always Enabled
Necessary cookies are absolutely essential for the website to function properly. These cookies ensure basic functionalities and security features of the website, anonymously.
Functional
Functional cookies help to perform certain functionalities like sharing the content of the website on social media platforms, collect feedbacks, and other third-party features.
Performance
Performance cookies are used to understand and analyze the key performance indexes of the website which helps in delivering a better user experience for the visitors.
Analytics
Analytical cookies are used to understand how visitors interact with the website. These cookies help provide information on metrics the number of visitors, bounce rate, traffic source, etc.
Advertisement
Advertisement cookies are used to provide visitors with relevant ads and marketing campaigns. These cookies track visitors across websites and collect information to provide customized ads.
Others
Other uncategorized cookies are those that are being analyzed and have not been classified into a category as yet.
SAVE & ACCEPT